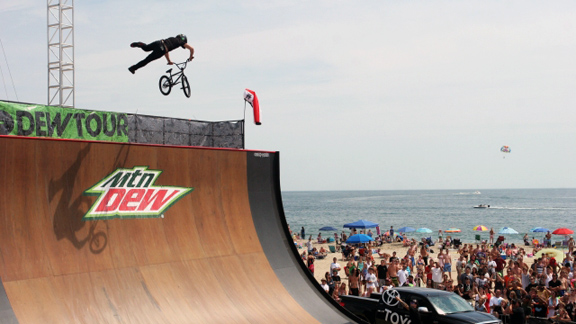 "With the big jump and the big quarter pipe you can allow yourself to do more technical moves and bigger moves, and that's what I came here to do," Warden said, in a post-podium interview.

Warden sealed the deal and claimed the $20,000 top prize with his fourth and final run, bumping his score to 91.63 with a backflip bike flip over the gap and a triple tailwhip on the quarterpipe. Warden had the better score in his second best run, giving hm the win over Kagy.

"It was the last chance and there were only two things that were going to happen: I was going to fall or I was going to pull it [off]. I just kept my head down and luckily I have the MiniMega at Woodward East and I can train whenever I want. It paid off today," Warden said. "I'm grateful to Woodward and I'm grateful to Chad for always being there to ride with me. It's an amazing day. I don't know what to say."